Written by
Lara
Posted in
Uncategorized
Comments
Leave a comment

Big Mac is Applejack’s and Applebloom’s big brother, the eldest of the children in the Apple Family.

He doesn’t say much. His two favorite words are YEP and NOPE. He does lots of important chores on the farm, ‘Sweet apple acres’, such as ploughing the field. He’s also very strong and could lift a kitchen cooker.

Did You Know: Big Mac has a fabulous singing voice and is a singer in the Pony Tones singing group.

She’s excellent at making apple pies and can tell you facts about anything even though she sleeps on her rocking chair a lot.

Did You Know: Granny Smith helped to create Ponyville by planting the first orchard. She once explored the woods near her old house and discovered a new type of apple tree that produced rainbow-colored apples called ‘Zap Apples’. As she started to pick them, wolves chased her back to her house. The next day, she planted the seeds and the trees grew in a flash. If she didn’t pick the apples quick enough, they’d all disappear. She made jam and many goodies to sell and ponies started to move into that land. So they named it Ponyville.

Written by
Lara
Posted in
Season 1
Comments
Leave a comment 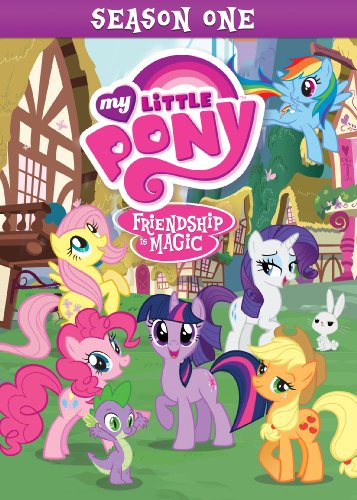 One day, Rainbow Dash was flying in the sky until she fell down so close to Twilight’s castle. Twilight was in her castle and came out wondering what that loud THUD was.

“What was that?” asked Twilight.

Twilight didn’t bother to ask Rainbow Dash what was going on so she started to investigate. She asked all the Pegasi (the ponies that can fly) how to be good at flying. But each and every one of them said the same thing that they learned when they were a foal, which was, “flap your wings and balance.” When Twilight had asked all the Pegasi walking around in Ponyville, she decided to ask the ones that were flying. The weather ponies (the Pegasi that change the weather) were pushing the clouds away, making way for the sun. Twilight asked them the same thing that she asked the other Pegasi she saw, but they said the same thing as everypony else “flap your wings and balance”.

Next, Twilight asked Zecora, her zebra friend. She was brilliant at making potions and spells.

“Well, I think this will do the cure but only if you take a sip, then it will do the trick,” she said in a funny voice while she was handing it over to Rainbow.

“Hi Fluttershy. Rainbow Dash can’t fly as well as before. Do you know how to make her better again?” asked Twilight.

“Oh no, I hope she flies well again,” said Fluttershy. “I don’t know how to fly as well as Rainbow and I didn’t get into the Wonderbolts Academy so not really.”

“Um, you left half a biscuit on the floor,” mumbled Fluttershy.

Twilight and Rainbow’s next stop was the Wonderbolts. The Wonderbolts are a group of Pegasi who fly very well.  Rainbow Dash got chosen as a Wonderbolt. They make a great team.

Rainbow and Twilight flew all the way to Cloudsdale (where the Wonderbolts lived).

The Wonderbolts were flying through the obstacle course practicing for the big show the next day.

“Hello, Rainbow Dash,” said Spitfire (a Wonderbolt) as she was finishing the obstacle course.

“Why are you here Crash?” asked another Wonderbolt.

(Some Wonderbolts call Rainbow Dash,’ Rainbow Crash’ because on her first try of being a Wonderbolt, she fell inside a bin)

Rainbow Dash just smiled. She was embarrassed that she couldn’t fly.

“Well, we’re a bit too busy to help you at the moment,” said Spitfire. She wanted to help her friend but knew that all of the Wonderbolts were busy practising.

The two ponies headed back to Twilight’s castle. They were slightly disappointed that everypony they met through the day couldn’t help until Twilight thought that she could ask Rainbow what she is doing to fly.

“How are you flying today Rainbow?” she asked.

“Well, I’m just flapping my wings and balancing but before I can go any higher, I look at the Pegasi near me and think that I am the worst flyer in Ponyville then I just fall down,” said Rainbow.

“Oh Rainbow, no you are not. I and all of our best friends think you’re brilliant at flying” stated Twilight. “Remember when you said that you are the best flyer in all of Equestria when you went to Wonderbolt Academy?”

Suddenly, Twilight had an idea.

“Rainbow Dash, I’ve got a test for you,” she said excitedly since she adored setting ponies’ tests.

Rainbow Dash sighed bitterly. She was the opposite of Twilight and hated taking tests. “You’re going to fly saying that you’re the worst flyer in all of Equestria and believe it,” proclaimed Twilight.

“What? Why?,” investigated Rainbow Dash.

“No time to explain. I just want to see if it works,” said Twilight in a hurry. So Rainbow Dash did what she was told. But after a few minutes, she fell down with a THUD.

‘KERPLUNK!’ Just as Twilight had expected.

“Ouch,” groaned Rainbow but she was determined to carry on flying so she stood up and took off. With a sudden landing, she groaned ‘OUCH’ again. This time Twilight told Rainbow Dash the opposite of what she told her before.

“Hmm I think I understand what you’re doing wrong Rainbow,” she said. “This time I want you to say that you’re the best flyer in all of Equestria and believe it because when you believe in yourself, you can do absolutely ANYTHING.”

So off she flew into the sky believing in herself. Usually,  after a few seconds she would have fallen down but this time, she stayed up in the air for 1 minute or more. Twilight got bored of waiting for Rainbow Dash so she decided to go inside her castle and read some books. Suddenly, she heard a swoop from outside. She didn’t want to stop reading her book and come out of her zone but she really wanted to find out what that swoop was so she put down her book and peered out of her window and saw Rainbow Dash. Twilight scurried out to Rainbow and asked her where she had flown to for such a long time.

“I flew to the stars taking an astronaut suit with me in case I would need it and it’s a good thing I brought it because I needed it to survive,” she exclaimed happily.

“OH MY GOSH Rainbow Dash. Did you really reach the stars? You should tell the Wonderbolts and the rest of our friends about this. They’ll be sooo happy and proud of you! You could make pony history. Oh I’m so proud of you for being determined and believing in yourself!” screamed Twilight hugging Rainbow.

“Thanks Twilight,” said Rainbow. Then she explained to Twilight that she’s already told the Wonderbolts, that she has reached the stars, on her way back down.

Twilight couldn’t stop asking questions as Rainbow Dash had actually reached the stars. She only reached them because Twilight had reminded Rainbow Dash to believe in herself and never give up. Twilight was so proud of Rainbow Dash that she asked her to write a letter to Princess Celestia about what she learned.

Today I learned that you should always believe in yourself and never give up because when you are determined, you can do anything!

My friend Twilight reminded me that and in the end, I actually reached the stars!